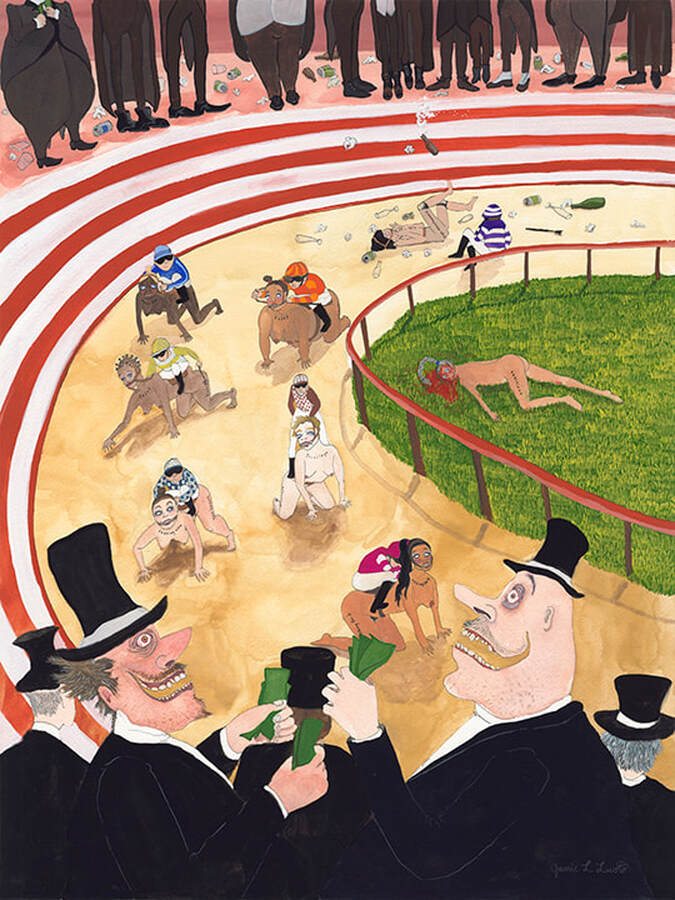 ©Jamie L. Luoto, "Churning Victory," gouache and ink on paper, 24 x 18 in., 2018, private collection
​Created in solidarity with the Time’s Up! And #Metoo movements, Churning Victory, uses metaphor and caricature to call out how egregiously greed, objectification and exploitation damage individual as well as overall gender identity in our patriarchal society’s treatment of women.

“Gentlemen” — who we might assume from their dress, wealth and social status to be honorable or acceptable — are committing crimes around a race track symbolizing the way in which sexuality and male/female relations have been turned into spectacle, competition, and entertainment.

Past and present collide here: the observers are dressed in the style of the Victorian era, but the jockeys and women on the track are clearly from present time. Indeed, while we have been taught that in the developed western world the objectification, exploitation and abuse of women were supposed to be things of the past, it continues to this day. 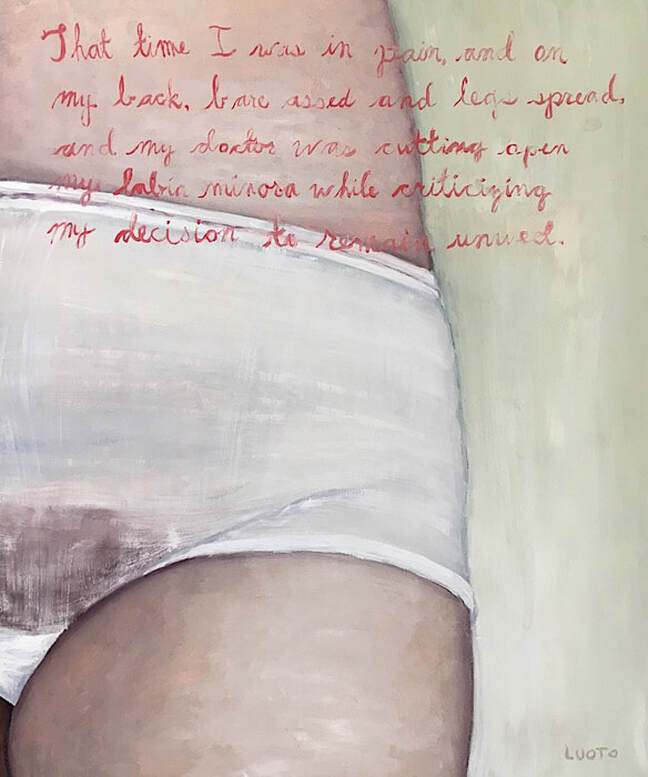 “[Jamie's] piece was a central point of discussion on a number of occasions ... the doctors/nurses were eager to share experiences... It was a real hit and a fantastic point of departure for some important conversations.”

​- Lauren Nye, Director of Exhibitions on using “Vulva Drain $300” in a monthly program for doctors, nurses, and doctoral students at the Susquehanna Art Museum.

America: She Was Asking For It 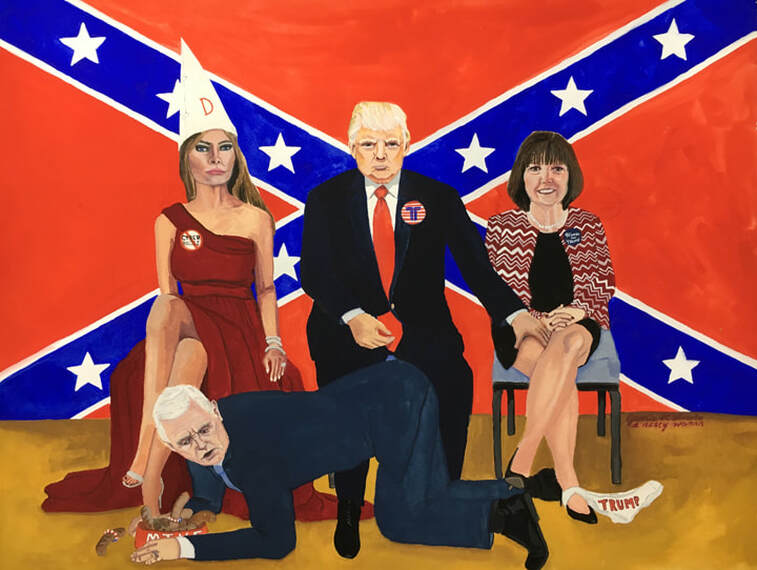 A variety of symbols evoke both an immediate visceral reaction, such as the confederate flag, as well as an ongoing discovery of depravity represented as small painted details, such as the pins, that reveal contradictions and hypocrisy.

I utilized the bright coloring effects of gouache to capture the flashy tone of media imagery and intentionally made the work small to emphasize the insufficient attention and transitory coverage given to these issues by the media.
America: She Was Asking For It, was included in an important new book, Not Normal: Art in the Age of Trump.

I am one of 147 artists responding to socio-political issues in the age of Trump. While the content is serious, flipping through the pages is cathartic. This powerful collection of 350+ artworks was curated by Karen M. Gutfreund, Independent Curator. Below is minute-and-a-half long video highlighting some of the artworks.

Copies of Not Normal are available to purchase here.

When the Rest of Heaven Was Blue 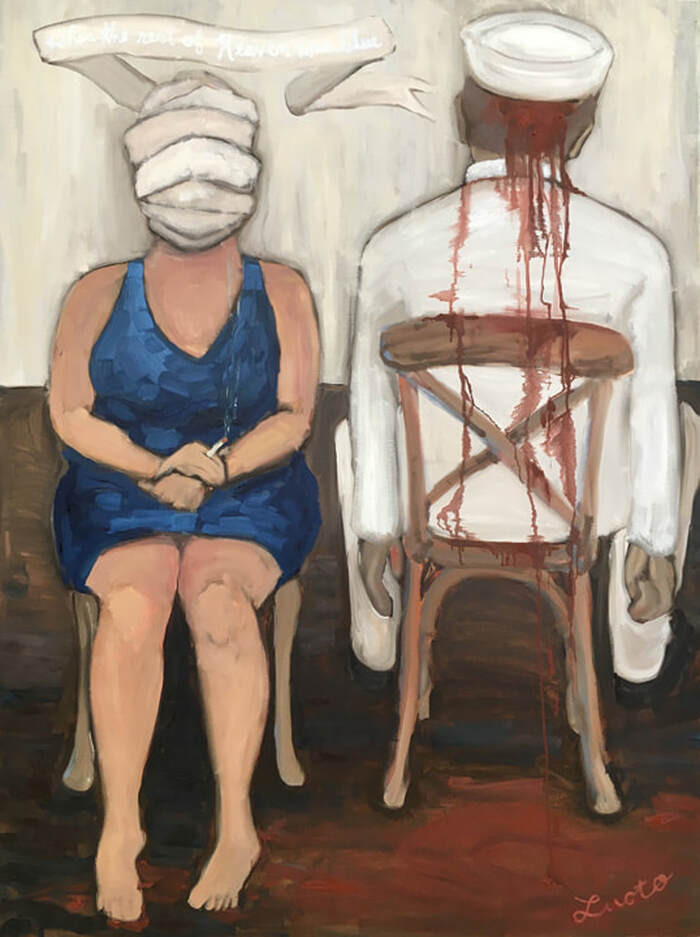 ©Jamie L. Luoto, 'When the Rest of Heaven Was Blue," oil on canvas, 48 x 36 in., 2016
When the Rest Of Heaven Was Blue is an intentionally mysterious piece. Memory or illusion is suggested by rough brush work and surreal qualities, such as the lit cigarette in the hand of someone who cannot smoke. By applying the literary and dramatic technique in medias res (“in the middle of things”) to this work, one is left to ponder - what might have just happened? and what might be about to happen? 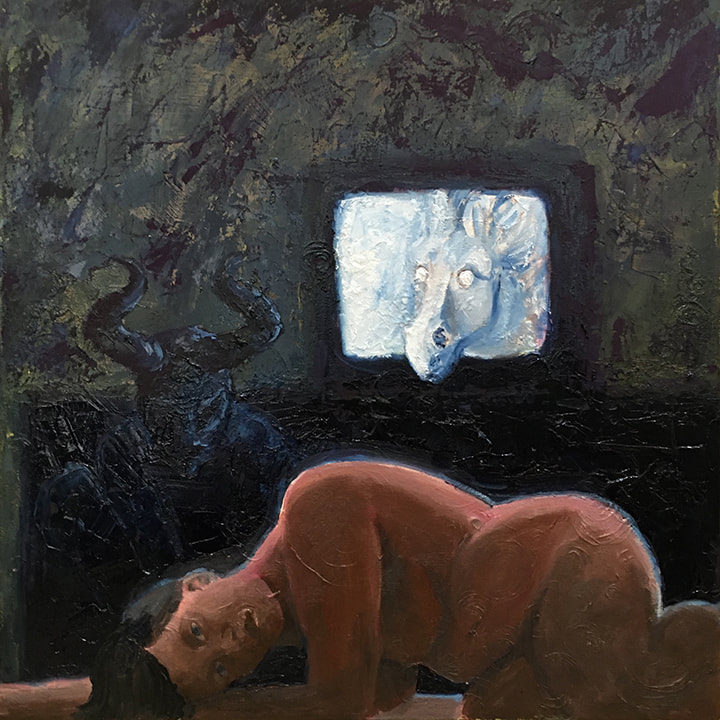 © Jamie L. Luoto, "Sober Jockey," oil on canvas, 20 x 20 in., 2016, private collection
Male dominance of art has denied women ownership over our identity & caused crimes & injustices against women to be ignored, dismissed, & glossed over. I confront this head-on by reinterpreting Henri Fuseli's, The Nightmare, from a female perspective. A scene presented as a nightmare is now one depicting the very real trauma associated with violence against women - a reality for millions of women. 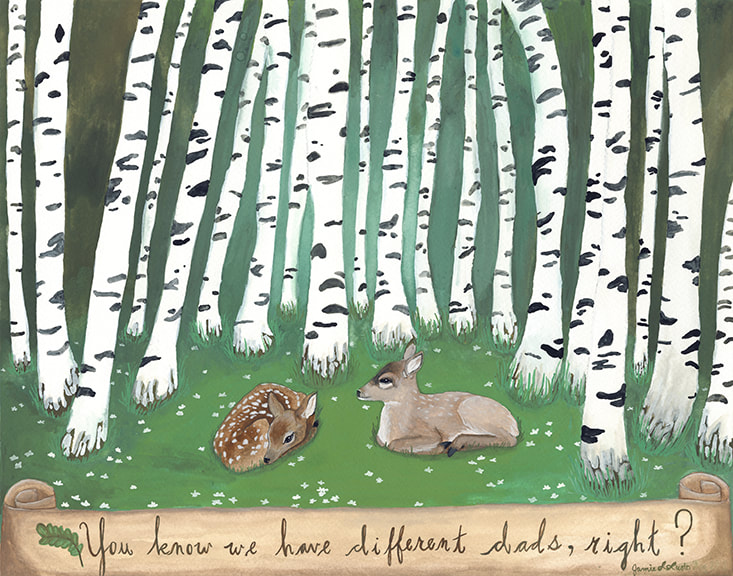 ©Jamie L. Luoto, "Two Fawns," gouache on paper, 11 x 14 in., 2012
Through the use of a traditional storybook illustration format, and a little half-sibling humor, this work of art explores the exclusion of alternative family units to the mainstream nuclear family narrative.